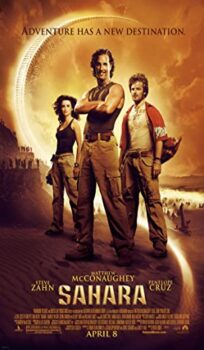 Master explorer and former US Navy Seal Dirk Pitt and his wisecracking buddy Al Giordino goes on the adventure of a lifetime of seeking out a lost Civil War ironclad battleship known as the “Ship of Death” that protects a secret cargo is lost somewhere in the deserts of West Africa. But while the two cross paths with a beautiful and brilliant U.N. scientist Dr. Eva Rojas who is being hounded by a ruthless dictator. She believes that the hidden treasure may be connected to a larger problem that threatens the world around them. Hunting for a ship that no one else thinks exists, Dirk, Al, and Eva must rely on their wits and their daring heroics to outsmart dangerous warlords, survive the threatening terrain, and get to the bottom of both mysteries.