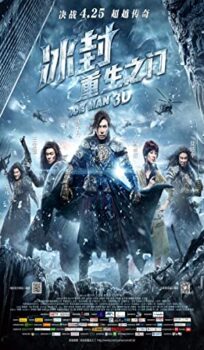 During the Ming Dynasty four orphans; Ying, Sao, Yuanlong and Niehu are raised in Taoyuan Village and become close to being brothers. Their exceptional martial arts skills allows them to reach the highest rank within the imperial guards. After a successful attempt to kill a Japanese troop leader, the Emperor orders Ying to escort the Golden Wheel of Time from Sindu back to the capital, which is said to have the power of time travel and foresee into the future. From the correspondence between Japanese and Ming officials seized from the mission, Mr. Tu – the Chief of National Defence – reveals that he can identify the traitor by the handwritings. On the way of escorting the Golden Wheel of Time in the snow, Ying is surprisingly confronted by Sao, Yuanlong and Niehu. They inform Ying the news of the murder of Tu’s family with Ying as the killer. The Emperor believes that Ying killed Tu in order to conceal his identity as the traitor, and orders to have Ying and his clan killed. With the Trio sent out to catch Ying, a separate troop is sent to Taoyuan to kill the villagers. From the evidence presented to Ying, he comes to the conclusion that the traitor has to be one of the trio and also the one behind the ruthless killing. Desperate to save the Taoyuan villagers, Ying chooses to fight his way out. The intensity of the duel has shaken the earth causing an avalanche that buries the four during the heat of battle. Now in 2013, Squire Tang, funded by a mysterious financer, digs up Ying, Sao and Niehu. As he is transferring the icemen to Hong Kong for further studies, the vehicle is involved in a traffic accident which, unexpectedly, defrosts Ying. Frozen for 400 years arriving to modern day Hong Kong, Ying accidentally meets an intoxicated woman named May on Halloween evening, who later gives him shelter. With his intelligence and hard-work, Ying soon becomes more familiar with the idea of modern society with the help of the internet. While adapting to his new life, Ying and May also gradually starts to fall for each other. Ying still never forgets about the injustice that framed him. He comes across a historical record on the internet stating that he plotted a revolt which branded him with the reputation of a traitor in history. However, there is no information regarding the fate of the villagers. For Ying to correct history, he must use the Golden Wheel of Time. However, Sao and Niehu are now also reanimated at present time. They continue to take up the chase they left behind in the past, eventually leading to several showdowns around Hong Kong.