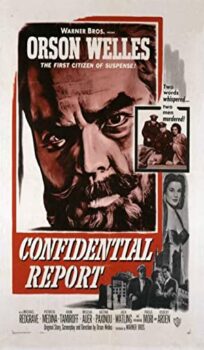 Guy Van Stratten, American smuggler, leaves an Italian prison term with one asset, a dying man’s words about wealthy, mysterious Gregory Arkadin. Guy finds it most pleasant to investigate Arkadin though his lovely daughter Raina, her father’s idol. To get rid of Guy, Arkadin claims amnesia about his own life prior to 1927, sending Guy off to investigate Arkadin’s unknown past. Guy’s quest spans many countries and eccentric characters who contribute clues. But the real purpose of Guy’s mission proves deadly; can Guy himself survive it?