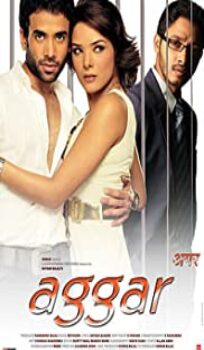 Summaries
A woman discovers that becoming attracted to the wrong man can have deadly consequences in this taut and tense thriller. Janvi (Udita Goswami) is a woman whose life would seem ideal on the surface: she runs a thriving business and is married to Dr Adi Merchant (Shreyas Talpade), a psychiatrist. But a faint air of discontent has begun to creep into her relationship when Aryan (Tusshar Kapoor), joins Janvi’s company. For the first time Janvi impulsively gets drawn into an acquaintance, which she believes will give her something to live for. But in a strange twist of events she realizes that she has stumbled badly and tries to break off her affair. Aryan, however, is not willing to give her up so easily, and his attraction to her soon becomes a dangerous obsession threatening to wipe out Dr Adi’s existence forever. Aggar is a story of electrifying Passion, Betrayal and Terror.